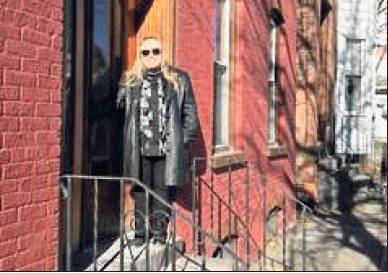 Provided photo – Christine Rem stands on the steps of Christopher House, a residence for female veterans in need, in Troy. 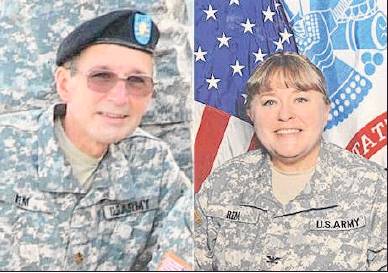 Two retired Army officers shared a dream of providing a supportive community resident for female veterans in need, including those with children.

Before retirement, Maj. Christopher Rem, who died in 2012, purchased a house at 515 First St., Troy. The empty two-story one-family home was in need of upgrade to become a community dwelling. The house had been in his wife’s family since 1920.

His wife, retired Col. Christine Rem of Troy, founded and became executive director of the Capital District Women Veterans, a nonprofit that provides support services and case management for female veterans in need.

Christine continued efforts to make their dream a reality. Early in the project, she helped raise funds for renovations and led volunteers, including helpers from veterans organizations, in renovation of the Christopher House, sponsored by CDWV.

CDWV case managers will be available to connect the veterans with vital services, such as housing, education, job placement and health management, according to Christine, who retired from the Army after more than 30 years of military duty, including a tour in the Iraq war.

The Christopher House project was officially launched during a ceremony on June 19. Once fully furnished, the house will become a home for up to five veterans.

“It was an expensive undertaking along with significant capital investment to upgrade the Christopher House,” said Jane Cordts of Troy, a CDWV board member. “It took a great deal of planning and design to get to this point. We now need donations in kind of furniture or donations to furnish all the rooms.”

A complete list of needed household goods, furniture and other items can be found at www.CDWV.org.

“The house will provide a safe, structured, homelike environment, which will lead to self-sustaining independent living,” Christine said.

The home was constructed in 1898. Her immigrant grandparents, John and Francis Guskie, bought the home and property in 1920.

Christopher had served in the Army and Army Reserve for 42 years before he retired. His military career began as an enlisted soldier as a laboratory specialist on active duty.

After he graduated from Samaritan Hospital School of Nursing in Troy in 2001, he was commissioned as a second lieutenant and an Army nurse. His assignments included time on the staff of the chief of Mobilization Branch and deputy chief of staff of Army Reserve Medical Command.

His wife, Christine, also is a retired Army nurse.

She earned a Bronze Star Medal while on duty with a Provincial Reconstruction Team in Ramadi, Iraq. She also had served with the 67th Combat Support Hospital in Germany and as a clinical officer in charge of the Army Reserve Trauma Training Program at Kings County Hospital in Brooklyn.

As a civilian, Christine has worked as a nurse manager and operations manager, as a public health preparedness representative for the state Health Department and as a Russell Sage adjunct instructor at the Stratton Veterans Affairs Medical Center in Albany.